Uneven Recovery: A Look Back at Minnesota’s Housing Crisis 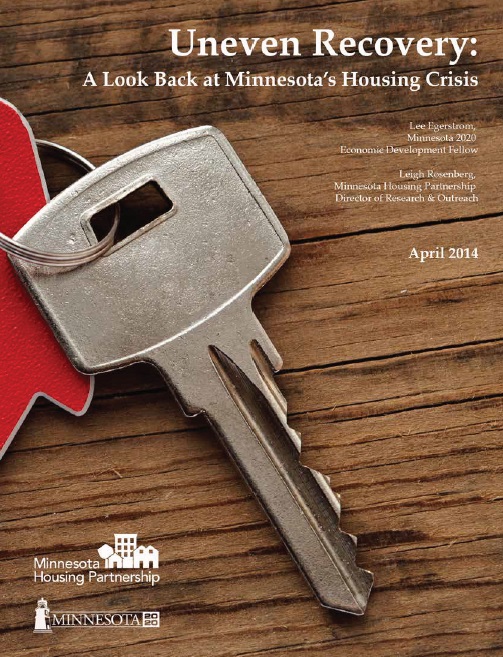 An uneven recovery is unfolding in Minnesota five years after the housing collapse this joint Minnesota Housing Partnership - Minnesota 2020 study finds. While a modest recovery is under way for middle- and upper-income homeowners, there's been virtually no recovery for those with more limited means, especially renters.

Renters at the lowest end of the income scale were especially hard hit by the crash. First, the housing market collapse pushed rental housing construction to historic lows, just as tens of thousands of foreclosed homeowners flooded the rental market. This created a statewide rental shortage. In Greater Minnesota, where rental housing was already in short-supply and often in need of repair, lower income renters have found decent housing that fits within their budgets hard to come by.

The Minnesota Homes for All alliance is calling on lawmakers to pass $100 million bonding to build and preserve affordable rental housing, rehabilitate abandon and foreclosed homes, and upgrade public housing units.

Here are some highlights from the report:

In low-income urban areas, families seeking the American dream lost wealth and homes. Unlucky renters living in properties owned by investors also lost when their homes went into foreclosure. While median home values in the urban communities examined in this report are higher than they were in 2011, on average, neighborhoods in North Minneapolis, St. Paul’s Eastside and Frogtown have lost 57 percent in median home value from the 2005-2006 peak.

Moving to the Exurbs

Exurban communities are seeing a fairly mixed recovery. We took the closest look at Albertville and St. Michael, which are back from the deepest depths of the housing crash, recovering 21 and 15 percent respectively from their 2011 lows. However, median home values are still roughly 33 percent below their 2005-2006 heights.

A View from the Countryside

Greater Minnesota’s housing recovery tells distinct stories depending on location and industrial ties. For many, the worst is over. A few pockets, however, were generally immune to the Great Recession. Southern Minnesota towns largely avoided a housing crash because their economies were tied to agriculture, which remained strong in the economic downturn.

Those areas hard hit in northern Minnesota that we will be featuring—Bemidji, Baxter and Brainerd—all experienced sharp declines in median home prices, with mixed but generally modest recoveries by 2013.