This second report, published in July 2018, analyzes data for 28,740 unsubsidized rental units in properties with four or more units in Saint Paul from the CoStar database.

Thousands of families paying too much for rent in St. Paul

Average rent rises above $1,000 — and out of reach for many city residents 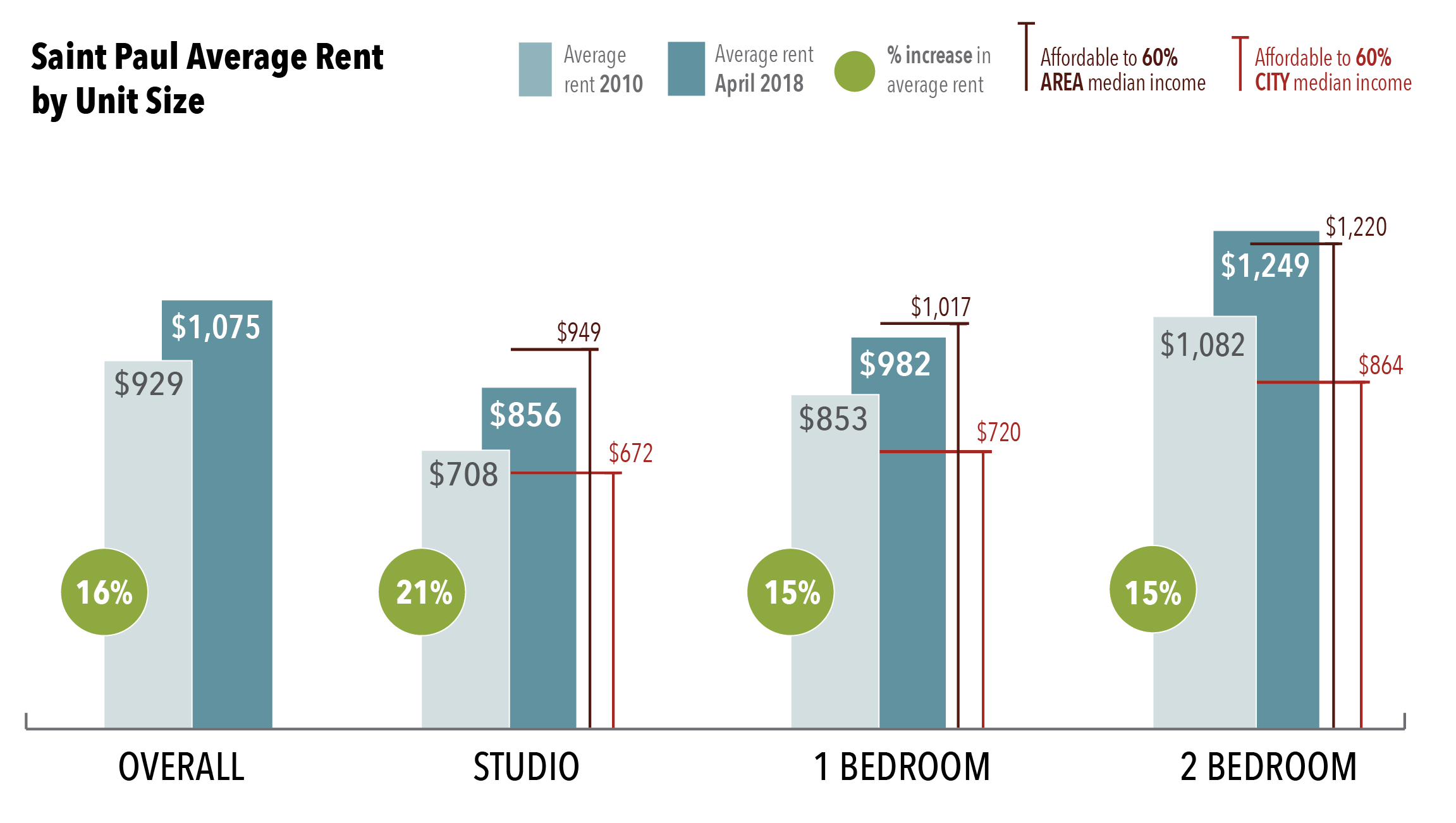 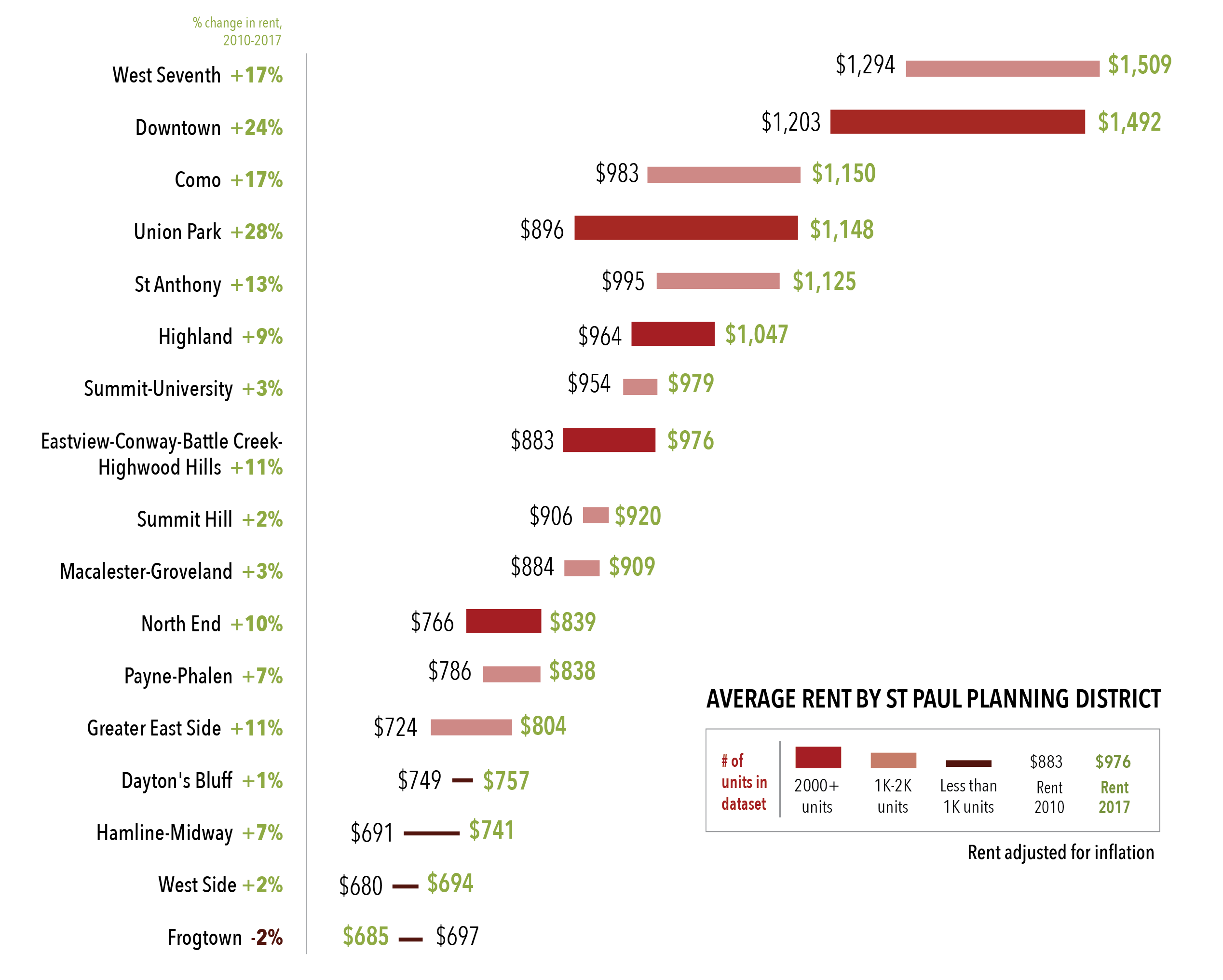 Vacancy rates plunge across the city 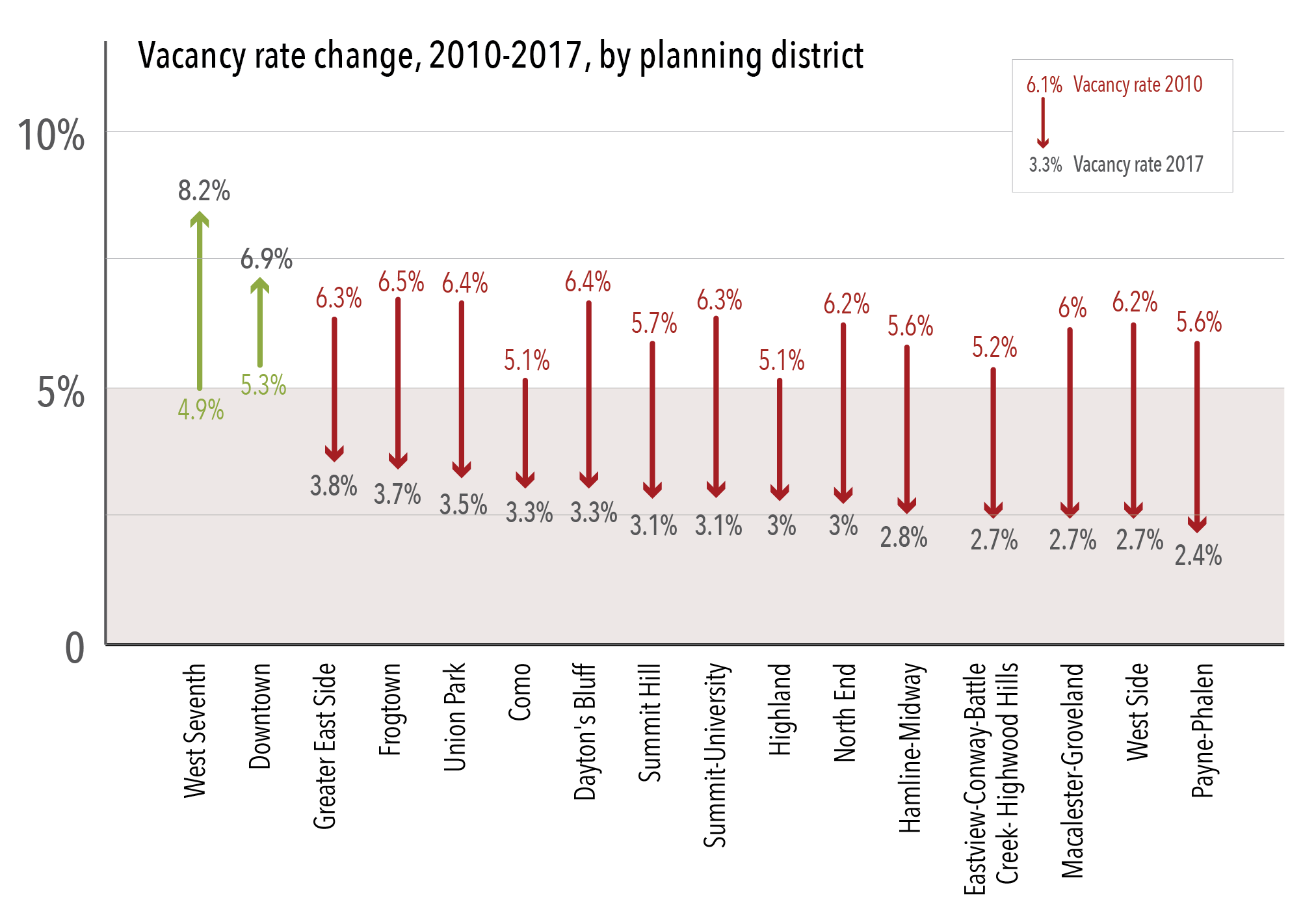 Thousands of households earning 40% to 60% of the area media income — for instance, a family of four earning $34,340 to $51,480 annually — are able to call Saint Paul home by renting in unsubsidized apartments in the private market. Unsubsidized units that are affordable to these residents are often referred to as naturally occurring affordable housing (NOAH). In total, 27% of the buildings in our dataset contain apartments that are affordable to those earning 40 to 60% of AMI, which is notably higher than the 7-county average overall (19%). Of all the units in our dataset, 38% are affordable to that income bracket, totaling 10,918 units overall.

However, the AMI standard assumes a median income family can afford to spend $2,145 on housing without being cost-burdened, when, in fact, the median income family in Saint Paul can afford just $1,602 on housing per month. This means that rents that are affordable to 40-60% of AMI are still out of reach for many Saint Paul residents. When we apply the 40% to 60% standard to the city median income (CMI), thousands of units fall out of affordability. In our dataset, there are only 3,120 units in Saint Paul that are affordable to 40% to 60% of CMI, compared to 10,918 when applying the AMI standard.

From 2010 to 2017, nearly 300 buildings with more than 6,000 apartments collectively were sold in Saint Paul. Over this timeframe, property sales peaked in 2016, with 64 buildings and 1,725 units sold that year. That represented 6% of all rental properties and 6% of all units existing in that year. From 2010 to 2017 the overwhelming majority of sales were Class C buildings. For instance, in 2017, 92% of all buildings sold were Class C. Compared to the 45-unit average for buildings sold throughout the 7-county region, properties sold in Saint Paul were much smaller. Only 8% of buildings sold had more than 50 units, while 84% had fewer than 25 units.

Rising rents and significant sales along the green line

While transit brings opportunity, such public investments can also lead to displacement. In the 114 market rate multifamily buildings in Saint Paul within a half mile radius of the Green Line average rent increased 19% from 2010 to 2017 — markedly above the citywide rise of 16%. Since 2010, nine properties have been built in Saint Paul within a half-mile radius of the Green Line; seven of those properties are Class A, with a current average rent of $1,712 per month, far above the current citywide average of $1,075. In these buildings, rent has increased 24% since 2010. There have also been 37 property sales from 2010 to the first quarter of 2018 along this corridor. 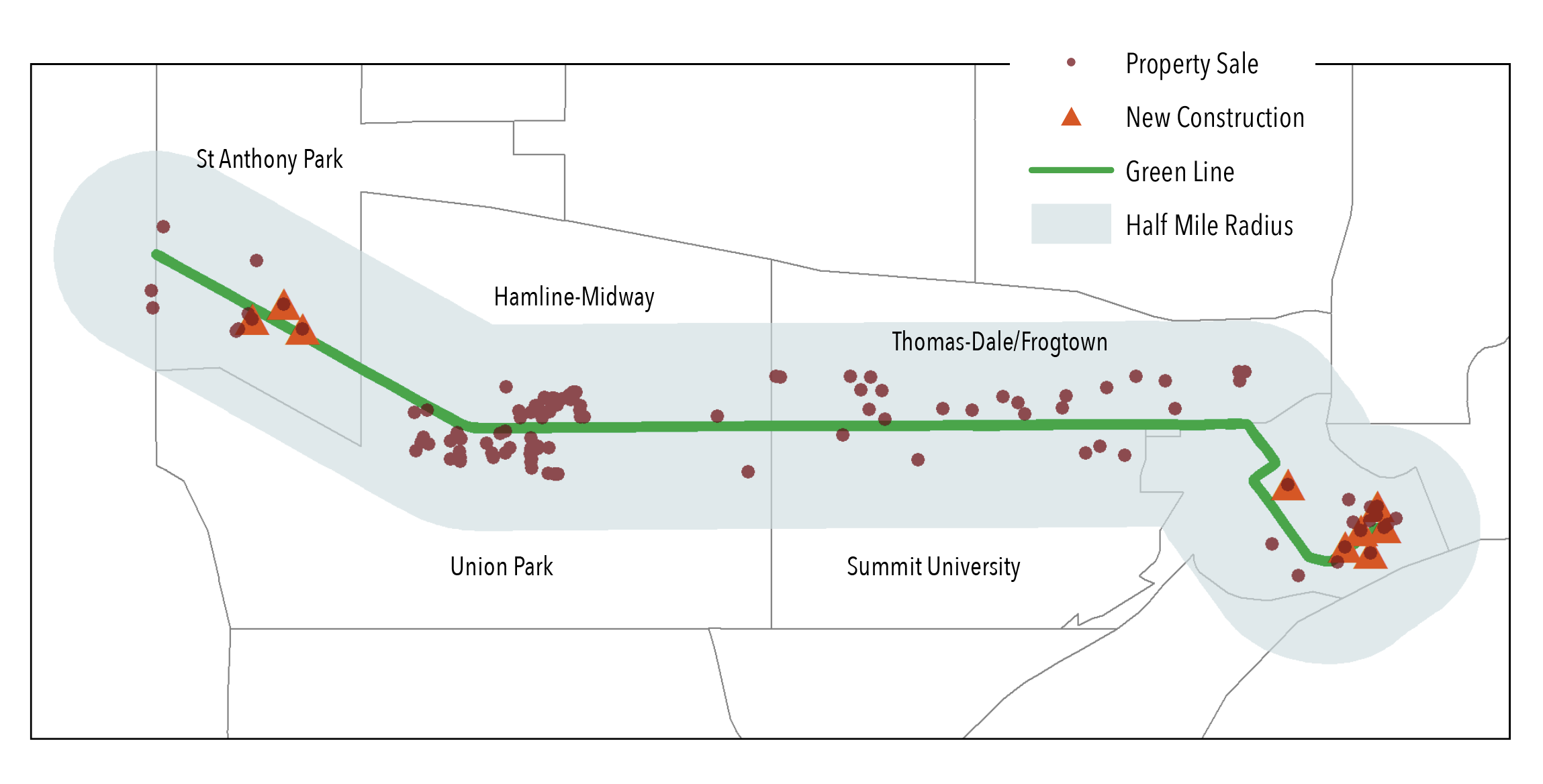 New production not keeping up with demand — or closing the gap

Not included in this report are affordable rental housing developments created with public and/or private capital funding that include affordability obligations. According to data from the Metropolitan Council, 1,407 new units of affordable rental housing were created in Saint Paul from 2010 to 2016. The majority (54%) are affordable to households earning 60% of area median income or more, while 59% of Saint Paul renter households earn less than 60% of AMI. Only 19% are affordable to 30% of area median income. Over that same timeframe, 3,732 unsubsidized rental units were created with an average rent of $1,658 in 2016. 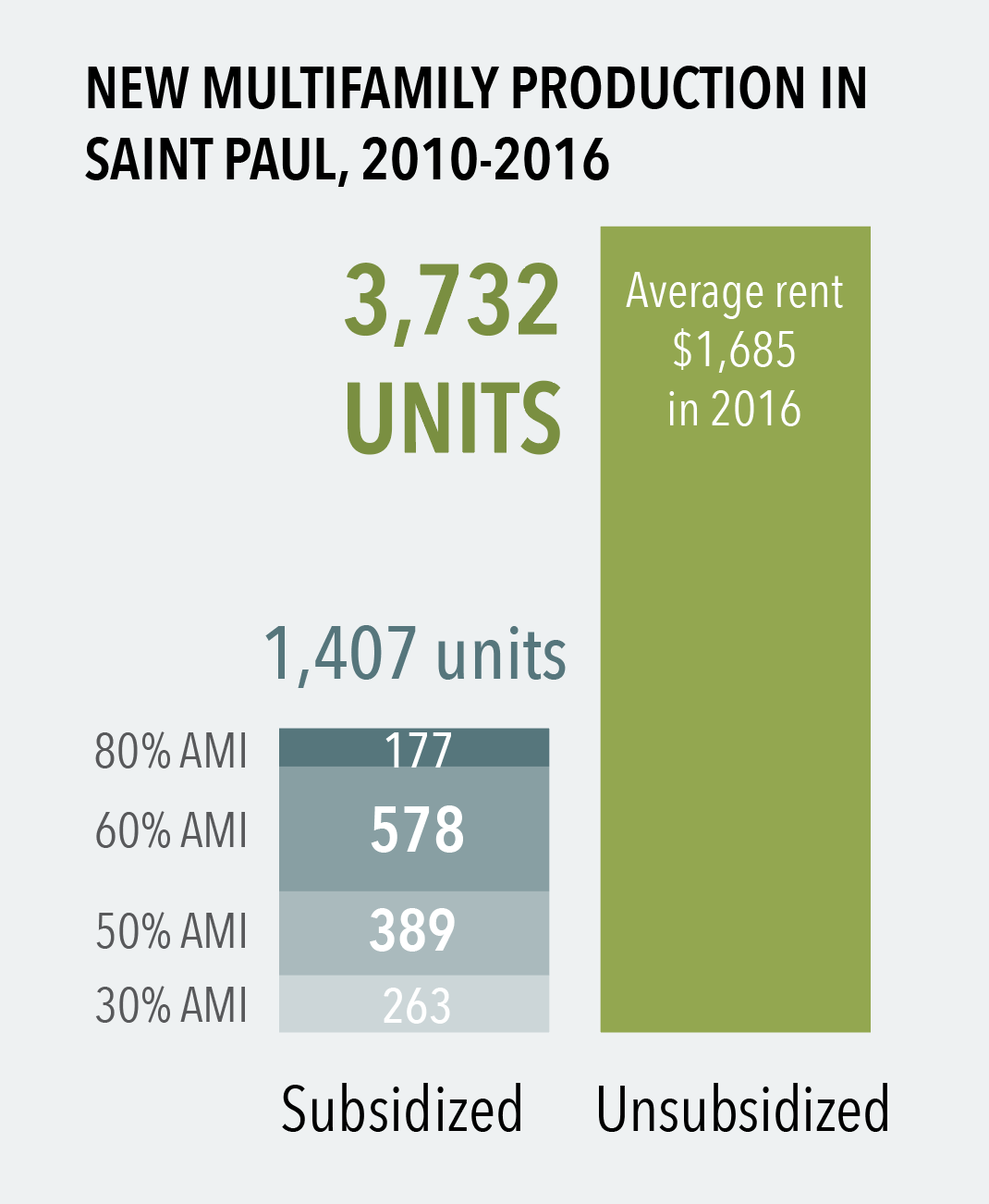 Like Minneapolis and the Twin Cities region overall, Saint Paul has seen rising average rent, declining vacancy rates and significant sales of multifamily rental properties over the past decade, challenging the thousands of renter households already struggling to afford safe, stable housing in their communities. Our analysis shows that, while more than 59% of Saint Paul renter households — 33,800 families — earn less than 60% of the area median income (AMI), our dataset contains fewer than 12,600 units that are affordable to those families.

Compounding this challenge, our analysis also highlights the distinction between the area and city median incomes. While the area median income, which includes more affluent parts of the region, is widely used as an affordability metric, renter households in Saint Paul earn less. This means that, when rising rents price families out or these properties with naturally occurring affordable units are upscaled, displaced families will be far less likely to find affordable units elsewhere. In fact, even subsidized affordable housing units at 60% of AMI will be out of reach for their income. Our analysis therefore highlights the importance of utilizing localized rental market data as opposed to using standard area-level data.

Our analysis also underscores an important potential distinction between the central cities and the suburbs in the size of NOAH properties. In our dataset, more than half of the buildings in Saint Paul that contain NOAH units have fewer than 25 units overall — and fewer than 1/3 have more than 50 units. In addition, the vast majority of properties sold have fewer than 25 units, as well. As advocates and policymakers explore and implement efforts to preserve NOAH units, these distinctions in property sizes will require different interventions and solutions.

Finally, our analysis provides further evidence that additional state and local resources are needed to address the lack of housing affordable to local residents, especially for those at the lowest income levels. Potential solutions could include city investment in an Affordable Housing Trust Fund and a statewide dedicated revenue source for affordable housing that targets investment for households earning less than 30% of AMI.

Questions? Feedback? Contact Gabriela Norton, Research Officer, at This email address is being protected from spambots. You need JavaScript enabled to view it..