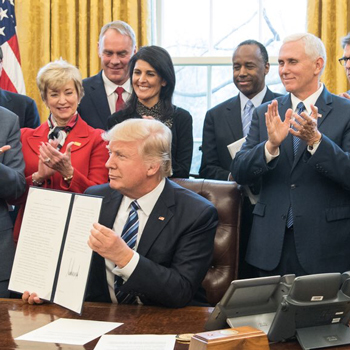 Of course, no one believes these cuts will become reality. Many sources in Washington, including members of the president’s own party, say the budget proposal is “dead on arrival.” But members of Congress do see the President's budget as a set of goals — and analysis from the National Low Income Housing Coalition emphasized that "advocates are deeply concerned that Congress could try to pass deep – but less severe –
cuts as a compromise."

Below is a summary of cuts contained in the budget proposal and the Trump administration rationale for those cuts. Look for a Minnesota-specific analysis on the impact of the Trump budget on housing soon.

Reduces rental assistance by $1.9 billion. Also proposes policies that include administrative relief, streamlining for grantees, policies that encourage work and self-sufficiency, including increases to tenant rent contributions (at the discretion of Secretary Carson).

Again, these cuts are wildly unlikely to pass muster in either chamber of Congress. “The president’s budget, as we all know, is a recommendation,” said Senate Majority Leader Mitch McConnell, reminding reporters that he didn’t endorse President Bush’s budget either. Rep Leonard Lance, R-NJ told reporters “there’s an old adage in Washington: the president proposes, the Congress disposes.” And Rep. Mark Meadows, the chairman of the House Freedom Caucus, told the New York Times that “even for some of us who are considered fiscal hawks” cutting Meals on Wheels “may be a bridge too far.”

But MHP, and our national partners, will remain vigilant as the budget process progresses — and share the potential impacts these cuts could have in Minnesota soon.