To grow and sustain their economies, cities are looking for creative ways to make housing development work. Local Housing Trust Funds (LHTF) are a proven tool to help meet local housing needs — and MHP is leading the charge on a measure in the Minnesota legislature (HF 1607 | SF 1389) that would encourage and fund the creation of LHTFs across the state.

Local housing trust funds are a consistent, flexible resource for the development of housing within a local jurisdiction. These trust funds allow communities to attract additional resources from public and private organizations and jump start projects that draw investment and jobs. Administered by local jurisdictions, LHTFs enable communities to prioritize developments that maximize benefit to the local community.

Already, a number of communities in Minnesota have or are benefiting from local housing trust funds.

ROCHESTER: From 1999 to 2012, the City of Rochester’s housing trust fund leveraged $22 million in funds and served more than 1,000 households. According to Steve Borchardt, Housing Initiative Director for the Rochester Area Foundation, “there’s no question” the fund helped to attract development and jobs to the area. 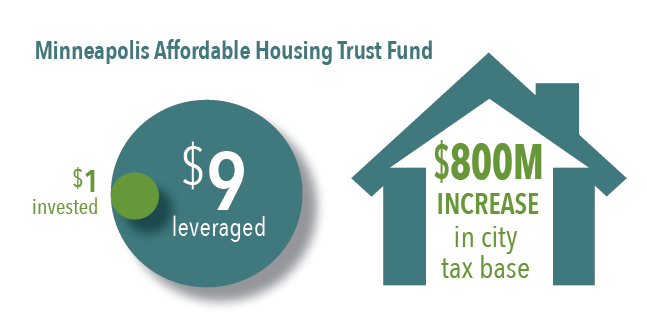 MINNEAPOLIS: The City of Minneapolis created its Affordable Housing Trust Fund (AHTF) in 2003, and resources it with a combination of city and federal resources. As a direct result of the AHTF the city tax base has expanded by up to $800 million, leveraging $9 for every dollar invested in the fund.

RED WING: The City of Red Wing recently established a trust fund, which is funded by maximizing the HRA levy. As of early 2017, more than $200,000 has been invested in the fund.

This legislation (HF 1607 | SF 1389) will provide local jurisdictions with clear direction and promote the establishment of local trust funds that bring together public as well as private investment. Legislation also would give communities flexibility in establishing trust funds including the development of city, county and even multi-jurisdictional trust funds.

Close to half of U.S. cities indicated that their housing trust fund received initial funds to jumpstart its implementation. The legislation rewards local jurisdictions for directing HRA levy funds to the trust fund.

Throughout Minnesota, there is a growing need for decent homes that are affordable to residents across the income spectrum. Leaders across the state recognize this critical need and are eager to address housing challenges in their communities

For instance, in Mankato, local leaders face significant challenges in providing adequate workforce housing. “We need more tools in the toolbox, and we just don’t have them,” says Patricia Ziegler of the Mankato Economic Development Agency.

Deanna Hemmesch, with the Central Minnesota Housing Partnership, has the same need for additional tools. “Many of my small town projects could utilize a housing trust fund,” she says, “because they don’t have a way to leverage funds.” Without those dollars her projects often aren’t competitive in applying for state funding.

Download our one-pager, and track the progress of the bill here and here.