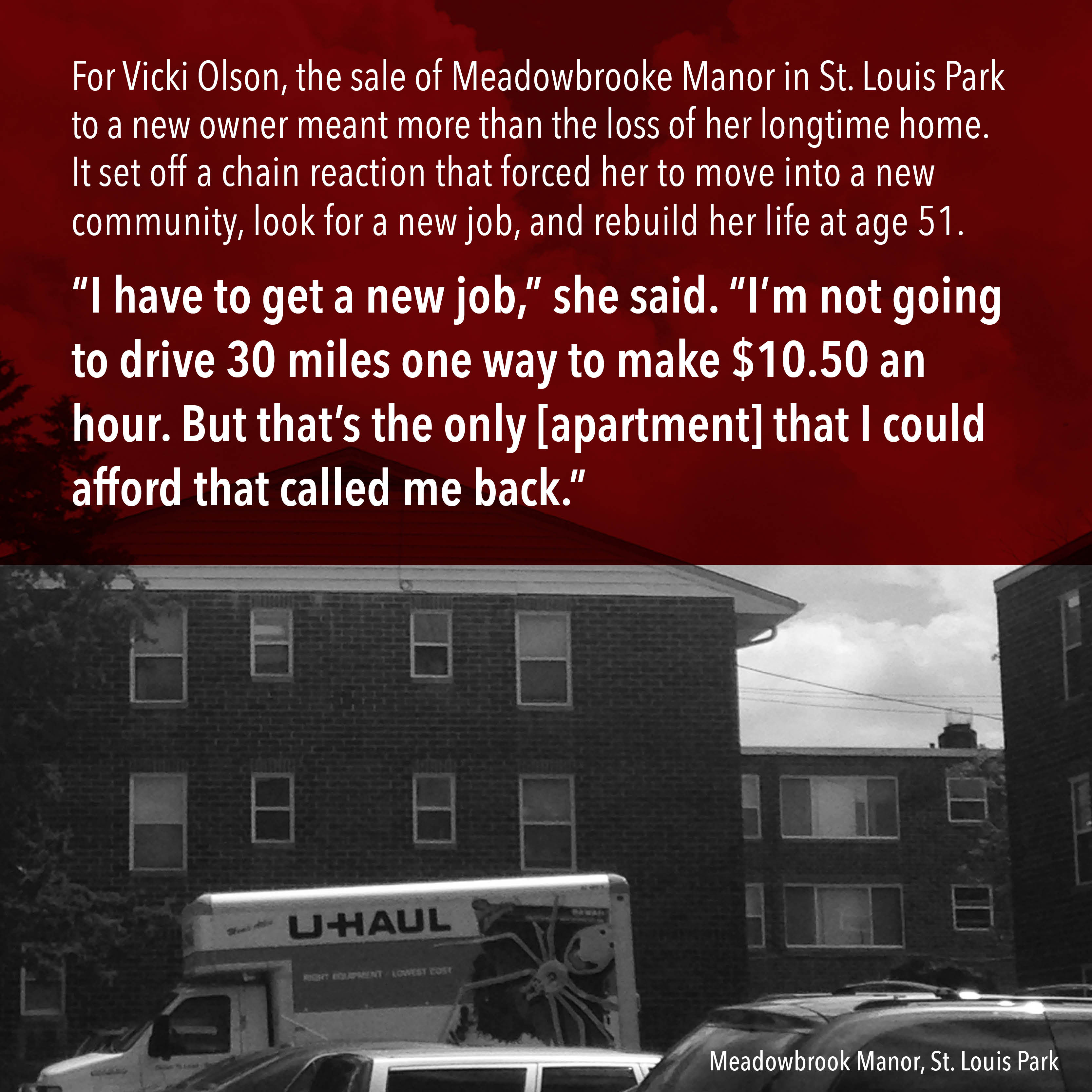 Sold Out, a report released this month by MHP, analyzed more than 1,000 apartment property sales in the Twin Cities metro region over the past decade. One trend to emerge: higher income households are driving the rental market — putting many low- to moderate- income renters at risk of displacement. One such renter was Vicki Olson, who had to leave her apartment of 13 years when a new owner raised rents. Karlee Weinmann interviewed Olson for MHP’s report.

For Vicki Olson, the sale of her apartment complex to a new owner meant more than the loss of her longtime home.

After 13 years, she could no longer afford to live at Meadowbrook Manor in St. Louis Park, setting off a chain reaction that forced her to move into a new community, look for a new job, and rebuild her life at age 51.

Olson left Meadowbrook at the end of May, splitting time between her mother’s one-bedroom apartment in Fridley and her father’s house in Brooklyn Park until she finally found an apartment in Mound for a July move-in.

While the Mound apartment solved one problem, it opened another. It extended Olson’s commute to her call center job in Hopkins from three miles to 30 miles — too far, she said, to justify the trip for the long term.

The Mound rental wasn’t her first choice — not by a long shot — but it was the first viable option to emerge after dozens of inquiries. A tight multifamily market across the Twin Cities meant few available units — and even fewer priced within Olson’s range.

“Do I want to live in Mound? Am I going to enjoy going back and forth to Mound? No,” Olson said. “But at least I can pay my rent.”

Most of her calls to area landlords, and even to a commercial apartment hunter recommended by the new Meadowbrook owner, went unanswered. A different broker offered her services, but couldn’t meet Olson’s rent limitation. She had paid $625 for her one-bedroom unit at Meadowbrook.

“I told her what I could afford, and she said, ‘I don’t know what you’re going to do because I don’t have anything that low,’” Olson recalled.

The uncertainty upended Olson’s life, and the scramble to find a new home took its toll. Olson hasn’t quite gotten over the shock of leaving her home of more than a decade.

She didn’t move away from Meadowbrook on her own terms, and she didn’t choose to grapple with other major life changes as a result.

"It really sucks that I lived there that long,” Olson said, “and it didn't mean anything to those people at all.”