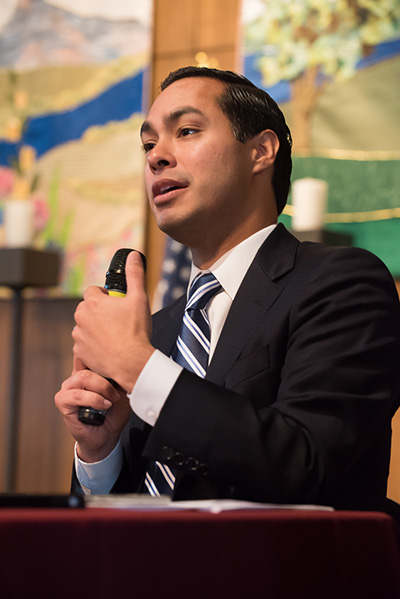 United States Housing and Urban Development (HUD) Secretary Julian Castro engaged housing advocates in a lively discussion about the future of affordable housing in the Twin Cities at a forum on October 30. Congressman Keith Ellison (MN-5) hosted the event, which was held at Mayflower Church in Minneapolis. The forum generated discussion on issues of mobility, property management and efforts to secure additional resources for affordable housing.

“Affordable housing is a platform for success.” - Secretary Castro

Secretary Castro opened the forum by outlining recent accomplishments at HUD, including the Affirmatively Furthering Fair Housing decision and the new disparate impact analysis. Referring to HUD as the "Department of Opportunity," Secretary Castro envisioned a HUD aiding in the creation of healthy, vibrant communities. Toward that end, he stressed the importance of mobility and improving access to new housing opportunities in order to positively impact people's lives. Secretary Castro applauded the audience for participating in the robust dialogue taking place in the Twin Cities. 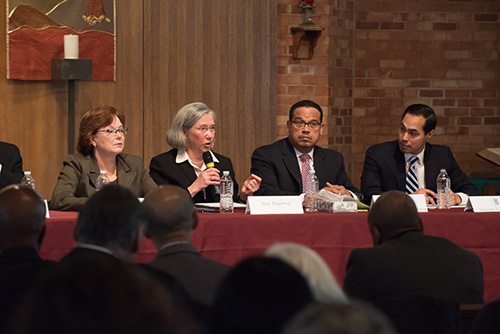 “Minnesotans should live in safe and stable homes they can afford in a community of their choosing.” - Commissioner Tingerthal

While Commissioner Tingerthal echoed Secretary Castro's remarks, the discussion among the panelists centered on the need for more affordable housing across the Twin Cities metro as well as the impact of racial disparities on housing-related decision-making -- most panelists agreed not enough is being done to tackle the issue. Cunningham criticized the lack of political will to increase African Americans' access to asset-building opportunities such as homeownership. Sitati condemned insubstantial private investment in communities of color and demanded greater accountability at the municipal level. 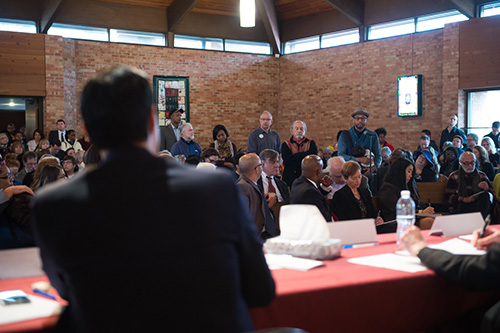 During the open comment period, individuals seized on the opportunity to voice their input on issues surrounding affordable housing and their personal experiences, sharing stories of unfair evictions, lack of home financing, rising rents and a sense that they lack the power to affect change. Audience members aired specific frustrations on poor property management and negligent landlords. Others voiced worries about restrictions placed on affordable units. Minor criminal charges often prevent potential tenants from getting the affordable housing they need. In response, Secretary Castro stated that HUD intends to weigh in on the broader discussion of criminal justice reform taking place in Washington.

Most panelists agreed that deeper investment must be made to improve housing conditions in the Twin Cities. Williams praised the work of nonprofit developers like Project for Pride in Living, but said he felt more could be done to attract private investors in order to finance projects with larger numbers of units. Williams emphasized his organization’s success revitalizing older, urban neighborhoods like Frogtown and Phillips. Yusuf Mgeni of the St. Paul NAACP encouraged more investment in existing urban neighborhoods. Mgeni noted that the high concentration of poverty in areas like North St. Paul limits people's ability to access opportunity and thrive. He added that a limited stock of housing options exacerbates this problem.

In his closing remarks, Secretary Castro assured HUD’s commitment to the Twin Cities and emphasized a willingness to partner on the challenges presented during the forum. After thanking Secretary Castor and the panelists, Congressman Ellison challenged the audience to remain engaged and continue to demand change. He encouraged support for the Homes for All coalition’s state bonding request during the 2016 state legislative session and cited his legislation, the Common Sense Housing Investment Act, as ways to advance much-needed resources for affordable housing.

“Where there is a constituency to drive an issue, there will be change.” – Congressman Keith Ellison.