A recent poll commissioned by the National Low Income Housing Coalition shows that while a majority of Americans support the Mortgage Interest Deduction, a majority also support reforming it to make it more beneficial for middle and low income homeowners and renters.

For decades, the Mortgage Interest Deduction (MID) has been considered a cornerstone of homeownership in the United States.  Homeowners who itemize their taxes are allowed to deduct the interest paid on up to $1.1 million in home mortgage debt and home equity loans.  Since the Great Recession, concerns have been voiced over both the cost of the MID and its benefit to middle and low income homeowners.  Since most Americans do not itemize their tax returns and instead opt for the standard deduction, most American households do not directly benefit from the MID.  According to a 2011 report by the Joint Committee on Taxation, about one third of all tax returns were itemized in 2009.  High income homeowners are far more likely to itemize their taxes and buy more expensive homes, which means that they receive the greatest direct benefit from the MID.

The National Low Income Housing Coalition (NLIHC) believes that MID reform can save the federal government somewhere between $20 and $40 billion a year and that these savings can be used to reduce homelessness and create affordable housing.  NLIHC proposes lowering the cap on mortgage debt eligible for tax benefits from $1.1 million to $500,000 and converting the deduction to a tax credit.  Lowering the cap will prevent the government from excessively subsidizing the most expensive homes.  Converting to a tax credit would make the tax benefit available to any American with homeownership debt, whether they itemize their taxes or not.  This means that more middle and low income Americans will receive a tax benefit.

According to a recent poll commissioned by NLIHC, a majority of Americans support the reform proposed by NLIHC.  The poll surveyed 1,006 adults nationwide between August  7th-19th, 2012.

The poll found that most Americans (76%) support the MID, but that there is strong support for reforming it to make it more beneficial for middle and low income homeowners.  The results show that 56% of Americans favor replacing the MID with a tax credit to help ensure benefits to lower income homeowners.  The poll also found that 63% support reducing the cap to $500,000.  Support for this reform is bipartisan: Democrats (68%), Republicans (61%) and Independents (62%).

Most Americans Believe Affordable Housing and Homelessness are Significant Problems

68% of Americans believe that not being able to find affordable housing is a large or very large national problem.  This ranked below health insurance and college affordability, but above adequate transportation. 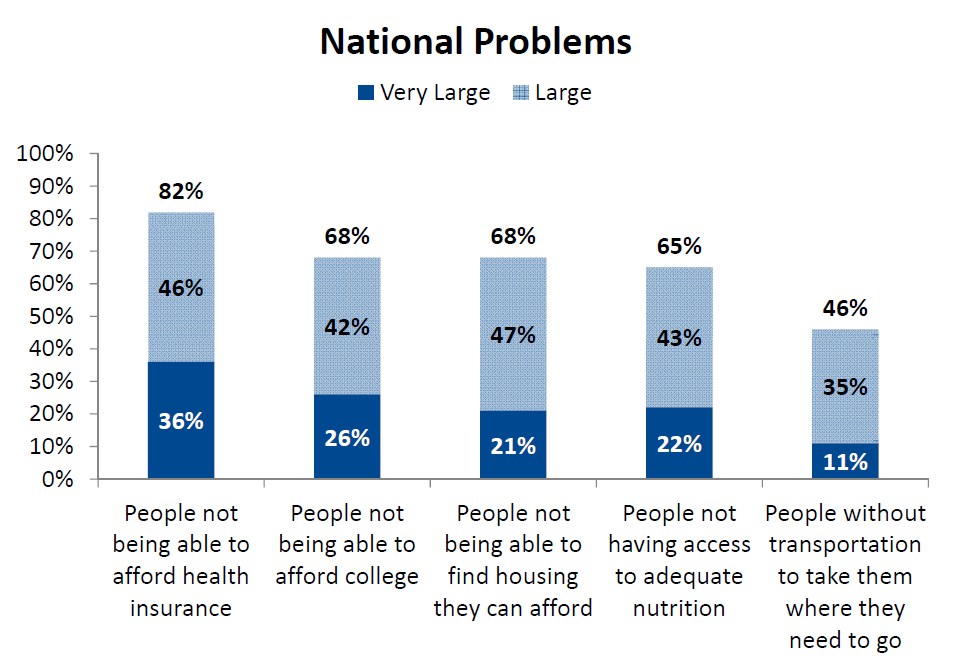 When asked how to use the savings the federal government would gain from the proposed MID reform, 63% said "end[ing] homelessness in the U.S." should be a top or high priority use.  This priority ranked below job creation and reducing the federal deficit, but it ranked above cutting taxes for middle-income people. 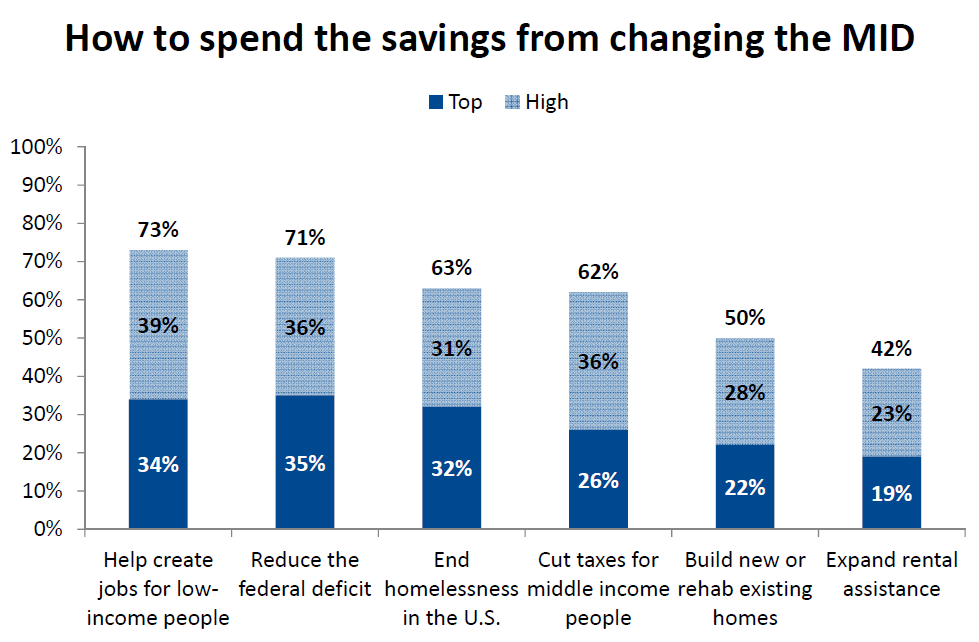 Americans are willing to support changes to the MID that will better benefit low and middle income homeowners and renters.  Support for MID reform is rooted in the desire to make the tax break targeted to those who need it most and to save the government billions of dollars a year.  The public is also willing to spend some of the savings from the MID reform on housing  for low income renters.  This reform is supported across a broad spectrum of homeowners, renters, and across political parties.

Representative Keith Ellison (D-MN) is expected to introduce a bill that would reform the MID and direct the savings to the National Housing Trust Fund (NHTF).  The NHTF will provide affordable rental homes for extremely low and very low income households.  This proposed bill has the support of over 200 organizations, including NLIHC.