A new Minnesota-based study finds that supportive housing improves outcomes for children who would otherwise be homeless, in particular in reducing child abuse and neglect. A couple of national studies highlight Minnesota's affordability woes. In a surprise finding, a new report says that walking and biking in rural areas aren't so rare after all. And finally, just what housing people have been waiting for: a way to figure out which Twitter feeds to follow. Can't-miss housing resources for abound for March! 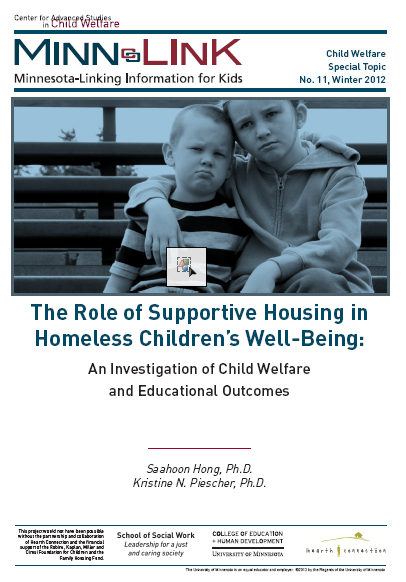 Analysis of Minnesota state-level data on children in homeless families suggests that supportive housing improves the lives of children, in particular in reducing abuse and neglect.

The study compares educational and child welfare outcomes of 70 children living with their families in supportive housing with outcomes for 342 children identified as homeless during the study period of 2007 to 2009. When families receive supportive housing, they access not only permanent housing but also social services to address job and life skills, substance abuse, and other needs.

Moves from school to school also trended downward for the children in supportive housing, but not the other kids. Findings on academic achievement and school attendance were also positive, with some measures showing mixed results.

The report's authors note the need for additional research on supportive housing services, as well as the need for more federal funding.

The study was conducted by the Minn-LINK project at the Center for Advanced Studies in Child Welfare (CASCW) at the University of Minnesota. Hearth Connection was a major partner and data provider. 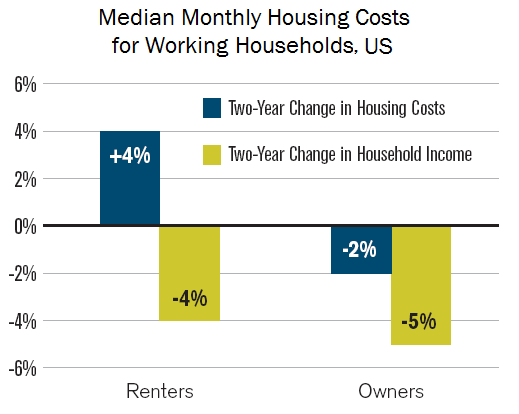 A new study by the Center for Housing Policy confirms that falling home prices have not solved the housing affordability problems of the nation's working households. In fact, finds the Housing Landscape 2012 report, the share of working households paying more than half their income for housing rose significantly between 2008 and 2010 for both renters and owners.  For Minnesota, both the state and the Twin Cities metro area followed national trends with a significant increase in the proportion of working families with a severe housing cost burden in those years. The report attributes the rise in housing cost burden to falling incomes and rising rental housing costs.

For those following Minnesota rental markets, it may come as no surprise that low-income renters can't find apartments they can afford. In fact, a new NLIHC report says that in 2010, for every 10 extremely low income Minnesota households, there were only 4 units that were both affordable and available to those families. The Housing Spotlight: The Shrinking Supply of Affordable Housing compares the number of low income renter households in each state with the number of rental homes that renters can afford. The analysis also takes into account availability-- whether a rental unit is occupied by a higher income household. Data is available for low-income, very low-income, and extremely low-income renter households, which corresponds to 80%, 50%, and 30% of area median family income.

"Nobody walks in rural America" a myth

A new report suggests that walking and biking in rural areas isn't as uncommon as people think. The report, "Active Transportation Beyond Urban Centers," shows that in large and small "rural cores" of 2,500 to 50,000 people, the share of total trips made on foot or by bike is only 20 percent lower than that of larger urban cores. For work trips, these rural cores have biking and walking rates in line with national rates. The report also highlights successful initiatives that have boosted walking and biking in small towns and cities.

Urban Land Institute's Urban Land magazine recently compiled a list of the top 15 housing industry sources to follow on Twitter. To generate the list, ULI looked at influence, number of followers, who each follows, and number of retweets. Check out the list. Fortunately for ULI, its feed ranks as number 5.