Each year when the annual Census data is released, MHP staff scramble to get a handle on the housing data. We know that Minnesotans, and especially renters, are struggling to afford housing, but what do the data tell us? Yesterday, we put out a press release with some top highlights, including some startling findings about Duluth and Rochester. For MHP Connect readers, here's a more in-depth analysis.

First, the information below comes from the American Community Survey (ACS) 1-year estimates for 2010. This is the most comprehensive data released about our country by the Census Bureau on an annual basis. The 1-year estimates cover places with a population of 65,000 and up. For smaller places, we have to wait a few more months for other ACS releases.

Overall, the news is not so good. Though 1-year changes from 2009 to 2010 are often not statistically significant, trends over time do paint a picture of families struggling to afford housing. Renters, the poor, the young, and older adults are among the worst hit.

In 2010, 13.8% of all Minnesota households paid more than half their income- approximately one in seven. This level of severe cost burden increased for the 8th consecutive year. Since 2000, Minnesota has had the fastest increase in severely cost-burdened households of any state nationwide. (Economically distressed Michigan comes in second.)

When families pay even 30% of their income for housing, housing is considered unaffordable, according to standards set by the Department of Housing and Urban Development (HUD). Families then often must choose between paying for their housing and other competing needs such as food, medications, and transportation.

Here's a visual of the trend since 2001. Note that the best number we have for 2000 is 8%, but the data can't be compared directly due to methodological differences in the surveys. 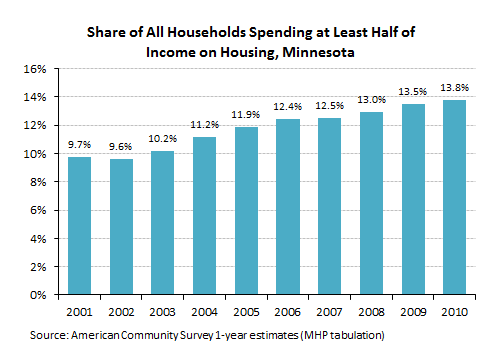 Income and What it Means for Housing Affordability

You may not be surprised that the median income for owner households is far higher than that of renter households. In 2010, it was $68,261 for owners and $28,043 for renters. Inflation-adjusted incomes have fallen over the decade for both owners and renters, but renters have been hit far more severely. In 1999 renter households earned about $36,400 in 2010 dollars.

While lower income Minnesotans struggle much more than higher income folks to afford housing, the issue is certainly not confined to the poor.

Senior citizens 65 and over and young adults under 25 are struggling much more than adults in other age groups to meet housing costs. In 2010, 1 in 3 senior-headed households overall, including 63% of renting seniors, paid over 30% of their income for housing.

Meanwhile, young people starting off their adult lives and careers are struggling to afford housing at an even greater rate. For households headed by people under 25 years of age, 58% paid over 30% of their income for housing in 2010. This included 40% of owner and 62% of renter households. (In this age group 82% are renters.)

While Twin Cities rental costs still top the charts [double check], in 2010, Duluth had the dubious distinction of having the highest level of renters paying more than 30% of their income for housing of any of the major Minnesota metros. 56% of renters in the Duluth metropolitan area fell into this category. Comparisons for other metros were: Minneapolis/St. Paul: 51%; Rochester:49%; St. Cloud 45%. The state figure for Minnesota was 50%.

And Rochester has seen the largest increase in renter households paying too much for rent in the last few years. Since 2006, the proportion of renters paying 30% or more of their income for housing has increased by nearly 40%. In 2010, Rochester's renters were statistically no better off than the state as a whole.

Share below with us how you think you'll use this data and any other comments. And look for more in the coming months as we update our Housing Trends, and when new American Community Survey 5-year estimates (to be released in December) provide information about smaller places.