February 2013 | Little Earth of United Tribes, the only urban Indian-preference community in the nation, recently launched a homeownership program. The homeownership initiative will enable residents to purchase affordable homes near the Little Earth Community as part of a Community Land Trust. Potential homeowners will also be connected to credit counseling and homebuyer education programs to help them be successful homebuyers.

Little Earth is a 212 unit HUD-Subsidized housing complex in South Minneapolis. It is home to over 1,000 residents, 70% under the age of 30. The home-ownership initiative will allow families that have stabilized since moving to Little Earth to remain connected to the community after they transition to homeownership.

From Entitlement to Empowerment: A Philosophy of Change

Founded in 1973, Little Earth was the focal point of American Indian life in the Twin Cities. From the beginning, the housing complex faced many challenges: poor site preparation, low-grade materials, unlivable conditions, and financial instability. Throughout the 80's and 90's the community struggled with crime and gang violence, high dropout rates, family dysfunction, and community isolation. The community felt an overwhelming sense of hopelessness.

In the early 2000's Little Earth experienced an amazing resurgence. New leadership recognized that the community needed to adopt a philosophy of self-determination and a renewed belief in itself and its leadership. Partnering with the University of Minnesota to conduct resident interviews, Little Earth began a community vision planning process. Creating a 10-year revitalization plan, residents identified the need for wrap-around services to develop self-sufficiency skills. New programming included youth education opportunities, one-stop case management, community farming, and safety programming.

Over the last eight years some families have stabilized and no longer need government-subsidized housing; however, many are reluctant to move away from the community and their support network. Little Earth leaders decided there was a need to create ownership opportunities near the community for Little Earth Residents and other Metro Native American Households. 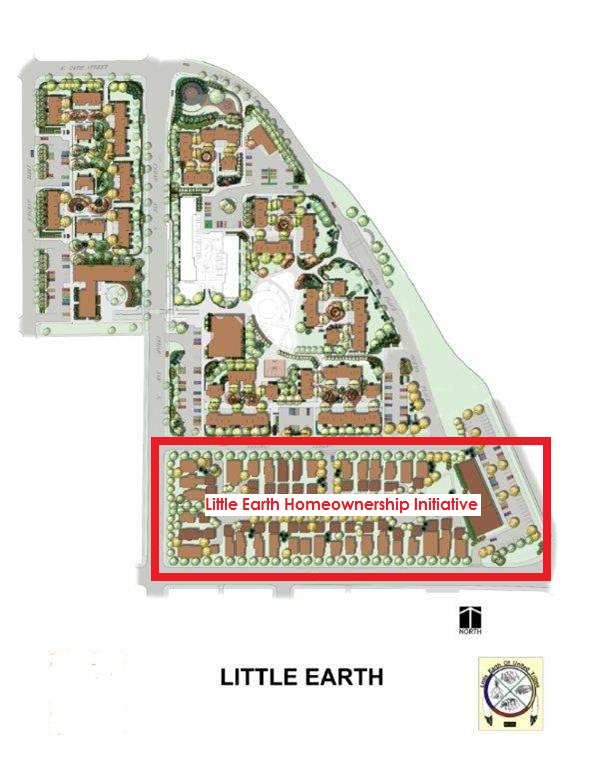 To launch the homeownership initiative, the City of Minneapolis, Councilman Schiff's office and Little Earth leaders identified the block directly south of Little Earth as an ideal location for the homes. After years of disinvestment and criminal activity, the block was ripe for revitalization, and its proximity would allow homeowners to remain connected to the Little Earth community.

Little Earth of United Tribes partnered with The City of Lakes Community Land Trust (CLCLT) to hold the lots in Little Earth's name, while the individual homeowners retain the equity of the houses. Little Earth will have the first opportunity to purchase any LEUTHI home that is sold so they can, in turn, mortgage it to another Native American family at a low rate. Bill Ziegler, President and CEO of Little Earth, noted some residents initially had concerns that pursuing homeownership was selfish or individualistic, a belief he says is inherent in many Native people. This shared-ownership model was an ideal solution to mitigate these concerns and allow families to build equity while remaining connected to the community.

Individuals that participate in CLCLT programs receive an average of $50,000 in subsidies to help bring down the cost of their home. This results in an average savings of $310 per month or $18,600 over a five year period. All CLCLT homes are rehabbed or constructed to meet Minnesota Green Community Standards to support lower monthly utility costs and better affordability.

To qualify for LEUTHI, a household must show proof of American Indian Tribal membership, make less than 80% of the area median income, and have a steady source of income. Interested families will have access to credit counseling and must attend a homebuyer education workshop to help prepare them for successful homeownership.

The first phase of the initiative includes five properties, four newly constructed and one rehabilitated home. The second phase will consist of acquiring and redeveloping an additional five properties.